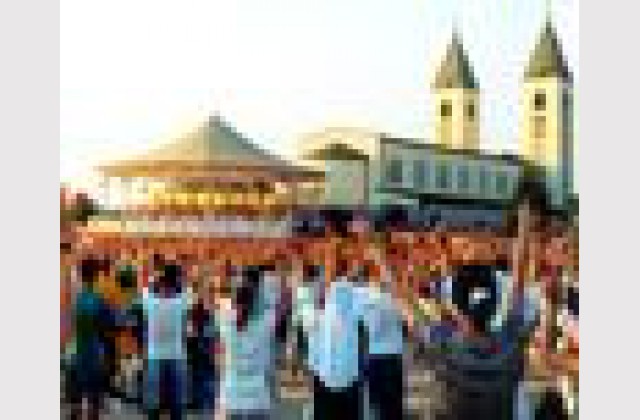 Together with  67.000 young people and more than 600 priests from all over the world, the FRAJU (Franziskus-Jugend, a community of young people following the way of St. Francis) took part in the 20th Youth Festival at Medjugorje. They were accompanied by members of our community "St. Mary, Queen of Peace".

The youth festival of Medjugorje, held between August 2nd  and August 6th, 2009, was the bigest summer meeting of catholic young people in Europe. The FRAJU started from Vienna via  St. Veit am Vogau, where they celebrated a holy mass. After a stop at the adriatic coast, they arrived at Medjugorje.

For the Austrians, who came from Vienna, Lower Austria and several parts of Styria, the days began with praying the "Laudes" at the terrace of the lodging. The official program at the stage behind the church included speeches, singing songs, prayers and the daily celebrated holy mass.

On Sunday, the final point of the program was the eucharistic adoration, on Monday the great procession through the parish of Medjugorje. On Tuesday, the community of  „Cenacolo“ presented a performance on stage. On Wednesday, after the holy mass we met to a further eucharistic adoration, and afterwards we admired a firework display. Until late in the night, the present nations presented themselves with song performances.

On Thursday, at 5.00 in the morning, the international meeting ended with a holy mass at the cross-hill (Križevac). To avoid the traffic of the people going home, our group went to Kravica for a swim. One day later, on Friday morning, our bus started for the journey home to Austria. All participants were glad, that they have been at the youth festival. They brought home different impressions and feelings, but they all were happy.