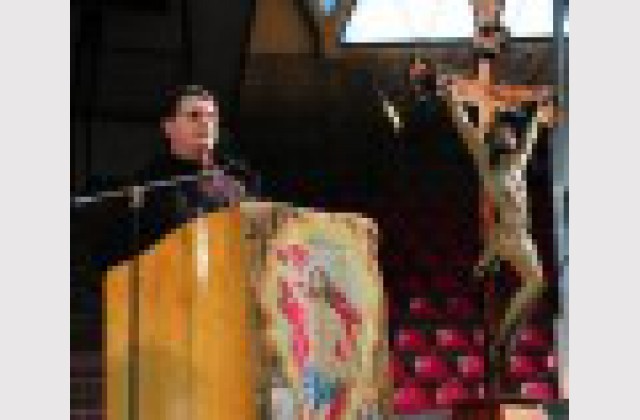 Under the topic "Varese meets Medjugorje", on December 5th, 2010 more than 5.000 people came together in the sporting hall of Varese in the north of Italy (diocese Milano). From our community, Sr. Ivanka Vasilj and Fr. Michele Pezzini were invited to take part at this meeting of prayers and to speak to the people about their vocations.

The meeting started at 9.00 am with the rosary, followed by songs, bearing witnesses and prayers.

In his morning lesson, Fr. Miljenko Šteko from the parish of Medjugorje spook about his parish and celebrated the eucharistic adoration. Mrs. Diana Basile from Italy gave evidence about her spontanous healing from MS (multiple sklerosis) during a vision of the Gospa at Medjugorje in 1984. Medical doctors from Varese reported their results from investigations of the seers during their visions. The witnesses of the seers Mirjana Dragičević-Soldo and Marija Pavlović-Lunetti were registered by the auditorium with special interest.

After the rosary at 5.45 pm, the seer Marija had their daily meeting with the Gospa, the mother of God. Marija explained, that during her vision the Gospa was present above the people, she prayed for them and gave her benedictions to them. At this evening, she gave no special message to Marija, but, by the meenings of Marija, the best message the Gospa could give was her presence.

The highlight of the meeting was the service at 6.00 pm and the eucharistic adoration, celebrated by Fr. Miljenko Šteko.