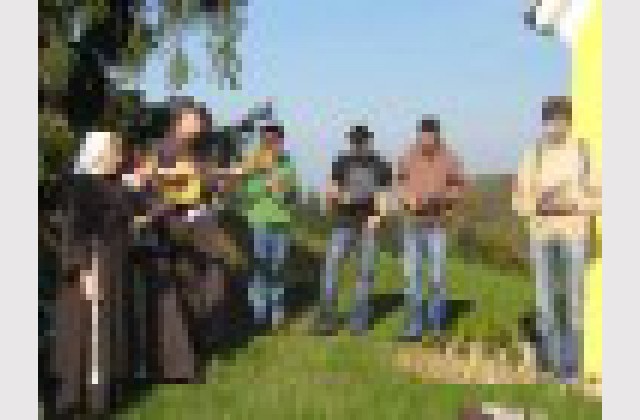 At October 11th, 2008, the three styrian deaneries, Leibnitz, Radkersburg and Feldbach started into a new year of youth-work with a pilgrimage of about 40 young people and their attendants from St. Stefan in R. to Glojach (Styria). Their guiding principle was: "That´s the beginning!". On their way, they visited our community at Trössing / Gnas, too.  » to picture gallery
Some more pictures, see the homepage of Katholische Jugend Steiermark.

After the summer break, there was much to talk about - and this was done firstly.

At the last stop, the brothers and sisters of our community got the possibility to introduce themselves to the young pilgrims and to explain them their daily life. P. Ignaz spoke about the spirituality and the history of the community, Sr. Ivanka told them her own life story and how she became a nun, and Fr. Clemens and Sr. Renate answered, using symbols, the difficult question: "What are you doing in a monastery the whole day long?"

Then, the young people went to the chapel - only few more steps. With a holy mass, musically accompanied by the band "Wild on Worship", they thanked God for the time they had together and they gave the new year of work into the arms of Him.

After a snack at the meadows surrounding the chapel, the pilgrims went back to their home parishes.