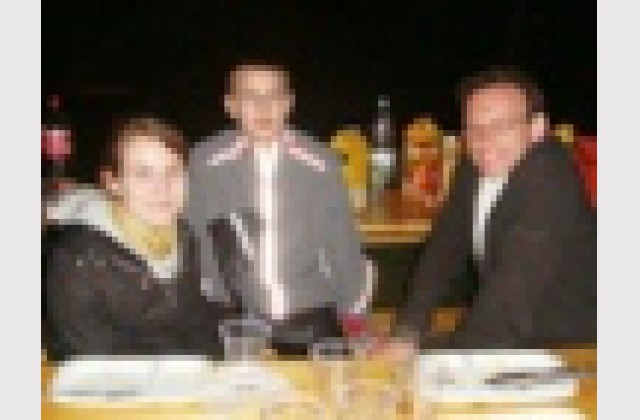 The train arrived with nearly one hour delay, but the lunch tasted much better than it would have tasted one hour before! After lunch, the young people took possession of the monastery gardens, where P. Michele and Br. Hannes had prepared the greens for games like football, volleyball etc.

After an early dinner, everybody prepared himself for an extraordinary evening prayer. Following the cross of San Damiano and having candles in the hand, the young people went down into the vaults of the monastery. In the vaults, the young people remembered the pain and cruel death of Jesus Christ with prayers and songs. They also remembered the conversion of St. Paul, whos life was glorified by the light of Jesus Christ. Therefor, the weak light of the candles in the hands was a symbol for the great light of Jesus in our lifes.

Descended from the cold and dark vaults, the young people came together ar the "Refektorium", the old dinning hall of the monastery, for a nice evening to get to know each other by games and jokes. There was much fun - even after midnight.

The next morning began, not so early, with the morning prayer, the "Laudes", at the house chapel - playing guitars and singing songs. Br. Hannes spoke about the Holy Spirit. He compared him with the wind: you can´t see the wind, but you can feel its presence, you can see its acts, but not itself.

After breakfast and cleaning the dishes used, the young people were divided into several groups for workshops: Br. Clemens instructed the singers, Leni the dancers, Kerstin showed how to create T-shirts, Br. Hannes and Sr. Renate explained the bible on a virtual journey through the holy land.

Then, for the styrians, it was time to prepare lunch at the kitchen, together with Prof. Viehberger. It tasted really fine - more will not be divulged. In the meantime, the others prepared the place for the camp-fire in the evening and the barbecue in the monastery´s gardens.

The afternoon was filled with sporting activities - playing football and volleyball again.

The evening program was introduced by the evening prayer, the "Vigil" and the holy mass at the "Refektorium" of the monastery. The holy mass, celebrated by P. Michele in commemoration of the feast of Whitsuntide, stood under the auspieces of the Holy Spirit, and the young people praied for the seven gifts, given by the Holy Spirit.

Then, it was time for the camp-fire and the barbecue in the gardens of the monastery. Anja and Michi were the "barbecue-masters", and the "Minis" from Maria Lanzendorf gave their best to explain (especially to the despaired ordens members) how to roast "Marshmellows" in the camp-fire.

Later in the evening, the dancers showed what they had learned during their lessons at forenoon. Singing (or something like singing), much of laughter and animation - it was a very long night at the camp-fire.

Very early (especially after the short night!) the morning began with the "Laudes". But everybody seemed to be alive! P. Michele explained a part of John´s letter (1 John 3, 1-2), the second lecture of the holy mass of the sunday today.

Prof. Viehberger spoiled the group with a plentiful breakfast, and afterwards, there was time to clean the dishes, to pack the baggage and to trial the songs for the holy mass.

At 10.30 a.m., the holy mass, celebrated by P. Michele, was accompanied by the members of our group. The church was full of a spirit of gladness and gratitude, especially when the song "Praise the Lord" was intonated.

Then, it was time for farewell. With lunch-boxes, the styrians went back to styria by train, and the young people from the parish of Maria Lanzendorf also went back home - full of impressions!